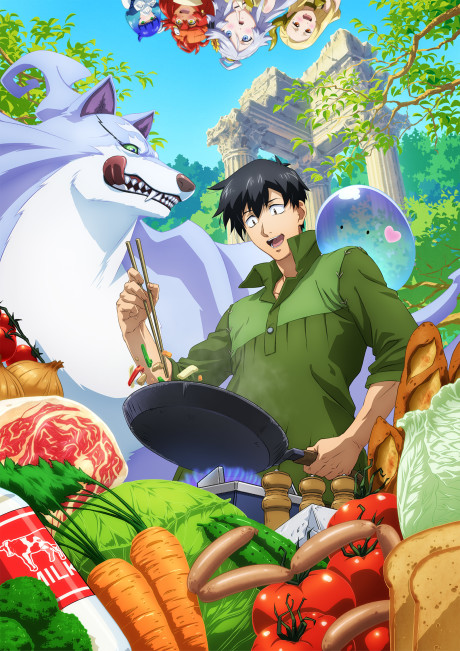 Plot Summary: Along with three other heroes, 27-year-old Mukouda Tsuyoshi is transported into a fantasy world to rescue a kingdom from a mysterious threat. However, it soon becomes clear that Tsuyoshi has been dragged into the summoning ritual by accident. His only skill turns out to be "Food Menu," which allows him to open an interface where he can purchase and obtain food-related supermarket items from modern Japan. Unceremoniously booted out of the palace, Tsuyoshi sets out on his own into his new world. However, his ability to create delicious dishes unknown to this world soon pays dividends, even attracting the legendary wolf Fenrir. Fenrir is so taken in by the food that the creature immediately forms a contract with Tsuyoshi, becoming his familiar. Followed by this whimsical mythical being, Tsuyoshi takes up a job as a merchant and adventurer, travelling and cooking up mouth-watering meals that never fail to amaze the inhabitants of this world.

Other name: Campfire Cooking in Another World with My Absurd Skill; Regarding the Display of an Outrageous Skill Which Has Incredible Powers ; とんでもスキルで異世界放浪メシ