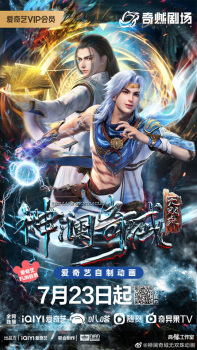 Plot Summary: In the 2501st year of the Glacier Calendar, the asteroid where the demons and the orcs survive flew to and hit the only continent on the phalanx - the fairy continent, known as the cataclysm in history. After the human ancestor Tianxing predicted the cataclysm with the Book of Prophecy, the two great powers, the demons and the spirits, joined all races to refine the seven-sacred artifact to fight against the collision and avoid the destruction of the world. The Fairy Continent was then torn apart and turned into seven seas and six regions. More than 300 years after the cataclysm, the demons gradually awakened and extended their minions to the Seven Seas and Six Regions... By chance, the two human teenagers obtained the Peerless Pearl among the Seven Gods Pearls, giving them the ability to The ability to summon each other. And the fate of mankind is about to be rewritten!

Other name: The Land of Miracles, 神澜奇域无双珠