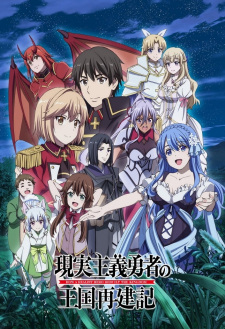 Plot Summary: Together with his talented aides, the "Realist Hero" Kazuya Souma continues his quest of reinvigorating the Elfrieden Kingdom through administrative reform. Having successfully conquered Van—the capital city of the Principality of Amidonia—Kazuya now faces the envoy from Gran Chaos Empire, who wishes to impose punishment for breaching the ban on war established by the Mankind Declaration Treaty. Despite the dire situation, Kazuya sees a path to avoid unnecessary conflict whilst gaining new allies. With his plan being seemingly perfect, the only barrier to success is gaining approval from the envoy.

Other name: How a Realist Hero Rebuilt the Kingdom, 現実主義勇者の王国再建記