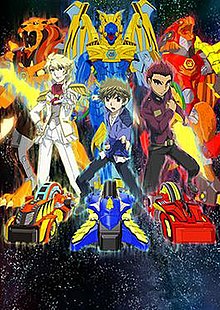 Plot Summary: The newest series of the Beyblade saga is BeyWarriors: Cyborg, warriors who resemble half-creatures and half-machines. Mysterious objects called "Beyraiderz" are found in the sanctuaries of Teslandia. The Cyborg Warriors transform the energy released from the sanctuaries into small objects called Tokens. Who will win more battles to collect the most Tokens? The series in set in the future sometime around the 22nd century, where humanity has colonized space. "Teslandia" is an abandoned planet, ignored by the rest of the nearby planets due to its harsh environment. The story begins with Nico, Al and Sola. They must get the most Tokens possible. When power spots containing high levels of energy called "Sanctuaries" are identified, and mysterious vehicle shaped items called "Beyraiderz" are found along with the Sanctuaries, the Beyraiderz can synchronize with the youths under the age of 17 living in Teslandia, and summon the Cyborg creatures known as "Warriors." The Warrior can transform high level "Sanctuary" energy into small Tokens. This means that human beings are able to obtain energy by making the "Warriors" battle against each other to turn the arid wasteland into a lush and bountiful world. So, who will win the most battles and collect the most Tokens? What mystery lies behind each Warrior? A group of invincible warriors with features of half-humans and half-machines can transform energy into small artifacts called 'Tokens'. Who will win the battles now? When the Warrior Battles start, two mysterious Warriors appear in the desert next to the stone region. These two mysterious battlers have the ability to give power to a Warrior to summon another Warrior in a battle and also the power to take away Tokens from the sanctuary directly from the symbols carved on the chest of the BeyWarriors. Who are these mysterious Warriors?